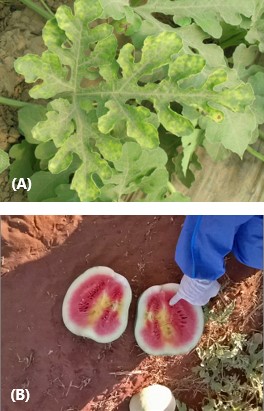 A webinar was held on Thursday 25 June to give an update on Cucumber Green Mottle Mosaic Virus. NSW DPI plant biosecurity experts provided information about the situation in NSW, host crops and weeds, symptoms and what to look for, and management options. The webinar was recorded and can be viewed here.

Cucumber green mottle mosaic virus (CGMMV) is a plant virus of the genus Tobamovirus.  There are at least five strains of the virus affecting fruit and vegetables of the plant family Cucurbitaceae, including watermelon, rockmelon, honeydew, cucumber and pumpkin.

Symptoms of virus affected plants vary between species and strain of virus, however mosaic mottling of leaves is the symptom most frequently observed. Other symptoms include vein-clearing, vein-banding, leaf distortion and internal discolouration of fruit and rotting.

In watermelon, symptoms typically include mosaic-like mottling on the mature leaves (Figure 1A) and affected plants may appear bleached and stunted with lesions on the stem and peduncle. Symptoms may also appear in young plants then disappear as the plant matures making detection difficult.

Fruit symptoms may include yellowing of internal flesh (Figure 1B) and sponge-like texture not suitable for market.

Upon infection, CGMMV multiplies and spreads within the plants systemically through sap. Virus particles remain viable in seed, infected plant material and in soil. In soil, the virus can persist for many years.

CGMMV is highly transmissible and is easily mechanically transmitted by direct plant to plant contact, contaminated tools, hands, clothing, machinery and planting trays. CGMMV can also be transmitted in water and by bees through infected pollen.

Infected seeds are the main source of long-distance spread.

Like all other plant viruses, CGMMV requires a living plant host for multiplication and spread.

CGMMV is known to occur in North America, Europe, Asia and the Middle East.

In Australia, CGMMV was first reported in field crops in the Northern Territory in 2014. Outbreaks have subsequently been reported from Western Australia and Queensland.

In NSW in 2019 the virus was detected in an isolated glasshouse facility where it is under eradication efforts. However further detections in March 2020 in field crops may prove unable to be eradicated. NSW DPI is working with affected growers to determine the extent of these recent outbreaks and implement strict biosecurity practices to prevent further spread.

The importation of CGMMV carriers into NSW, including plants, soil, production equipment and coverings are subject to regulations depending on the source location and labelling showing traceability.

In NSW carriers of CGMMV are prohibited from jurisdictions without state wide or area freedom from the virus. However, used Cucurbitaceae production equipment and coverings are permitted if they are free of soil and plant material and accompanied by a Plant Health Certificate certifying the equipment is clean.

See the Biosecurity Order (Permitted Activities) 2019 for the full conditions to import CGMMV carriers into NSW.

Put in place biosecurity best practice actions to prevent entry, establishment and spread of pests and diseases on or from your property: