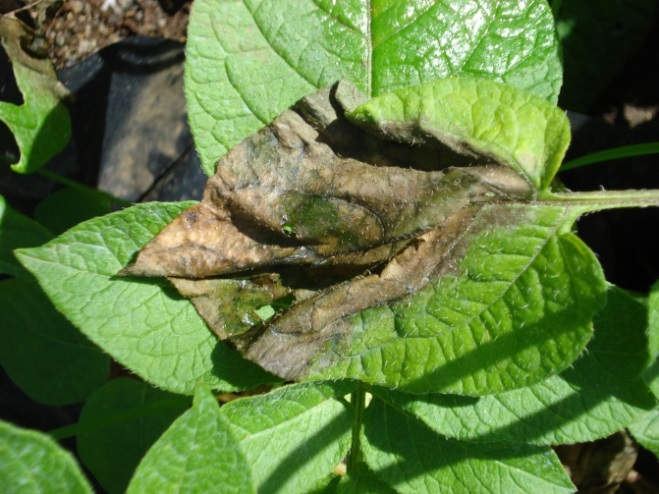 Late blight (Phytophthora infestans) (A2 mating type) is an exotic plant disease not present in Australia. This disease is a serious threat to Australia’s potato, vegetable and fruit industries.

Late blight (caused by Phytophthora infestans) is one of the world’s worst diseases (or blight) of potatoes. Late blight caused the 1840’s European, Irish and Highland potato famines and destroys 5% of world potato crops every year. It is also a serious disease of capsicums, chillies, eggplants, pepinos, tamarillos and tomatoes (Figure 1).

Late blight (Phytophthora infestans) (A2 mating type) is not a notifiable plant disease in NSW.

However, if you suspect Late blight (Phytophthora infestans) (A2 mating type):

Late blight is caused by the water mould Phytophthora infestans. Though water moulds (or oomycetes) look similar to fungi, they are more closely related to algae. As a consequence late blight spores require water to germinate and penetrate host plant tissues.

Infected potato tubers have brown to purple skin lesions that are dark, reddish brown underneath (Figure 3). They have an uneven, corky, dry rot inside and can become a foul-smelling mush if infected by secondary bacterial soft rots.

Late blight causes sudden plant death and destroys infected potato crops in a matter of days. It attacks the host plant’s foliage, fruit, stems or tubers at all growth stages. Healthy looking potato tubers may also break down in storage due to late blight infection.

Sporangia and zoospores are short-lived spores in plant debris or soil. They are killed by frosts and hot weather. Sporangia inside potato tubers and oospores may live for many years. The late blight lifecycle is completed under ideal conditions in five days, if the air temperatures remain above 10°C and humidity is over 75% for two consecutive days.

Zoospores are washed by rain into the soil where they may infect young potato tubers. The thick-walled oospores travel longer distances by water or wind. Animals, humans and farm machinery can also carry late blight spores in infected plant material, soil or water on their hooves, footwear or tyres.