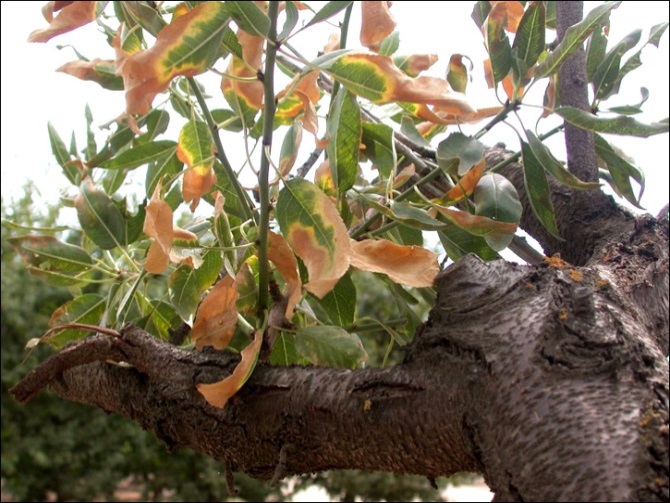 Bacterial leaf scorch of tree nuts (also known as almond leaf scorch or golden death) is caused by the bacterium Xylella fastidiosa. The bacterium lives and multiplies in the sap, blocking water uptake to the leaves.

Sap feeding insects spread the disease between plants. Once a plant is infected there is no treatment other than to remove infected limbs or whole trees to try and prevent spread.

Xylella fastidiosa is responsible for a number of diseases in other horticultural crops, including Pierce’s disease of grapevine, citrus variegated chlorosis and alfalfa dwarf disease. No strains of Xylella fastidiosa are present in Australia.

Bacterial leaf scorch symptoms first appear with the onset of warmer weather. The tips or edges of leaves initially turn light grey-green before developing a burnt or bleached appearance along the leaf margin.

The ‘burnt’ edge of the leaf progresses unevenly towards the mid rib and develops a golden yellow band between the dead part of the leaf and the inner green tissues (Figure 1).

Infected leaves eventually die and remain attached to the tree.

Symptoms may at first be isolated to one branch before spreading to the rest of the canopy over time. The alternative name ‘golden death’ comes from the golden yellow colour of the canopy of a severely infected tree (Figure 2).

Rate of spread within the tree is variable. It will often take several years for an entire tree to become infected, though in some cases the whole tree has become infected within a year.

Bacterial leaf scorch symptoms can resemble those of salt burn. Salt burn has an abrupt margin between the dead and healthy leaf tissue, with little or no intermediate yellowing. Salt burn is also more evenly distributed along the leaf margin compared to the uneven spread of bacterial scorch.

The presence of bacteria in the plant sap restricts flow of water and nutrients in the tree. Infected trees become stunted and less productive. Leaves die, flowering and fruiting becomes irregular and infected limbs die back.

There is no known treatment for bacterial leaf scorch once trees become infected. Susceptible plants will eventually die, however tees that become infected may still survive for many years if disease spread and tree decline is slow.

Introduction of the disease to Australia could occur with human assisted movement of infected plant material or with insect vectors. The disease is not carried on or spread by seeds.

Xylella fastidiosa is native to the Americas and has spread to Europe where there has been recent detections in Italy and France. It is also present in the Caribbean, Taiwan, Iran, Turkey, Lebanon and Kosovo. Presence in India and Morocco is unconfirmed.

Many common weeds and grains including bermudagrass, rye, fescue grasses, watergrass, blackberry, elderberry, cocklebur, and nettle are hosts of Xylella fastidiosa and can serve as reservoirs of disease.

Overseas, common orchard weeds such as bluegrass, burclover, cheeseweed, chickweed, filaree, London rocket, and shepherd's purse have also been found to be infected.