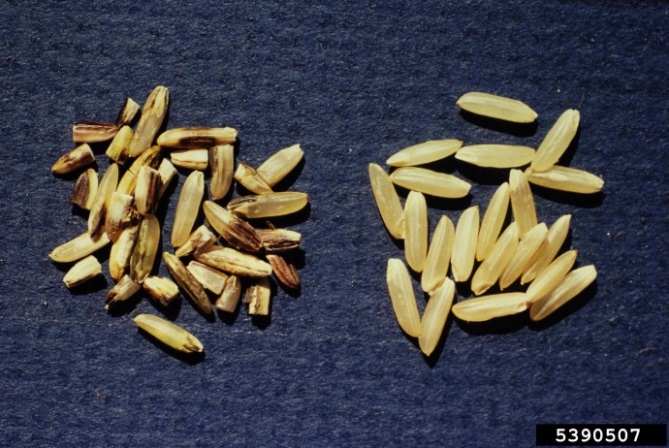 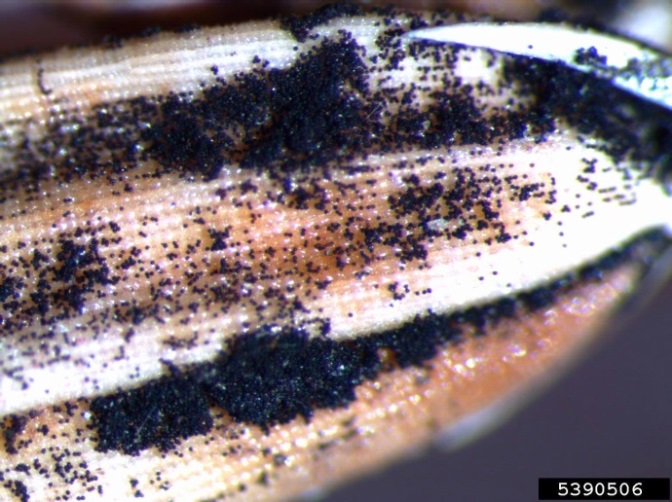 Kernel smut of rice (Tilletia horrida) is an exotic plant pest not present in Australia. This disease is a serious threat to Australia’s rice industry.

Kernel smut of rice (Tilletia horrida) is a notifiable plant disease in NSW.

Kernel smut of rice reduces grain quality by producing black, sooty masses of powdery spores which replace all or part of the grain (Figure 1). Some strains of the fungus produce toxins which taint milled grain.

Kernel smut of rice is most evident at crop maturity. Black masses of spores replace the grain and burst out through the hulls (Figure 2).

Dislodged spores from infected grains settle on other plant parts forming a characteristic black dusty coating. During harvest black clouds of spores can be released into the air and cover the machinery and equipment.

The fungus survives as spores in the soil and in infected seed. Germinating spores infect immature developing rice grains. The fungus replaces the endosperm of the grain with a mass of black spores.

The kernel smut of rice fungus is not systemic. Flowers are infected individually by wind-borne spores and only a few florets in a panicle may be infected.

Wind-borne spread of kernel smut of rice spores infects and reinfects rice panicles both within a crop and into neighbouring crops.

Long distance spread occurs when spores of the fungus are transported on infected and contaminated grain, machinery and equipment.

Spores of kernel smut of rice are able to float on water and may be spread this way.

Kernel smut of rice is not present in Australia.