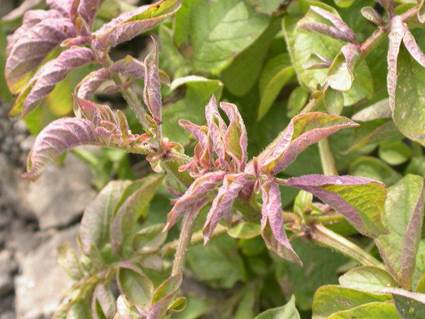 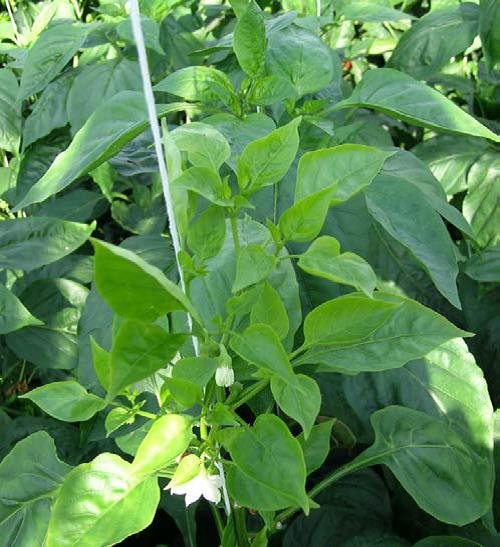 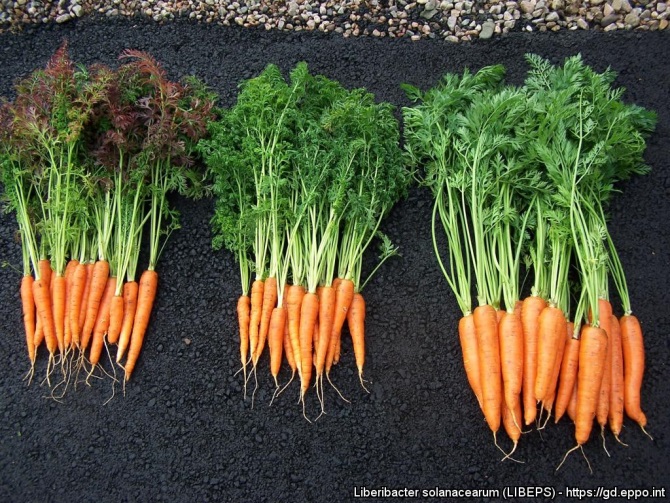 Candidatus Liberibacter solanacearum was detected in imported parsley seed in 2017. Haplotypes D and E were detected in seed imported into Australia from Italy and Germany. These haplotypes are different to the haplotypes that are vectored by tomato-potato psyllid and cause the plant disease zebra chip in potatoes.

The detection occurred in an imported commodity and therefore the bacterium is not currently considered present in Australia.

Candidatus Liberibacter solanacearum is a notifiable plant disease in NSW.

Infected carrots have leaf curling, bronze, purplish or yellowish leaves, stunted main roots and shoots and a proliferation of side roots (Figure 6).

Infected celery has an abnormal proliferation of shoots, stem curling and yellowing.

Psyllid insects, which spread the bacteria by feeding on plant sap, can also damage host plants as they feed. The psyllids have piercing needle-like sucking mouth parts.

When feeding on potatoes, tomato potato psyllids inject toxins in their saliva, which causes leaf purpling or yellowing and results in smaller, fewer or misshapen potato tubers.

It takes one to two months after inoculation by infected psyllids to produce disease symptoms in host plants.

Plant disease symptoms are not constant over time or between sites. They may vary with the seasons, host plants, haplotypes or environmental conditions.

Potatoes and tomatoes are the most severely infected plant hosts, capsicums and eggplants show less severe symptoms, while carrots, Cape gooseberry, celery, parsley, tamarillo and thornapple can be symptomless hosts.

Candidatus Liberibacter solanacearum bacteria move inside the phloem tissue of host plants. By living and multiplying in phloem tissue they avoid the plant’s natural defences against pathogens. When phloem-feeding psyllid insects feed on plant sap in the phloem tissue, the bacteria are also eaten.

The bacteria multiply in the psyllid host. They move from the psyllid’s gut to its salivary glands, where they can infect host plants when the psyllids feed. Psyllids become infectious within three days of ingesting the bacteria. Once the psyllids acquire the bacteria, they remain carriers for life.

The Candidatus Liberibacter solanacearum lifecycle alternates between plant and insect hosts. The bacteria are obligate parasites and can only multiply inside host plants and psyllids. The prefix “Candidatus” is used in the bacterium’s name as it can’t be cultured outside its natural hosts. The optimum temperature for disease development in potatoes is 27-32°C. The bacteria are heat-sensitive and don’t seem to tolerate temperatures over 32°C.

Tomato potato psyllid spreads Candidatus Liberibacter solanacearum by feeding on infected plants or via intergenerational trans-mission of the bacteria through its offspring.

Infected psyllids can fly between host plants or be moved as eggs, nymphs or adults on plant material. They are also dispersed by aircraft, shipping containers, farm machinery and vehicles.

Candidatus Liberibacter solanacearum was first found in potatoes in Mexico and Central America in the 1990’s. Haplotypes A and B were spread to Solanaceous crops in the United States and New Zealand by tomato potato psyllids.

Tomato potato psyllid (TPP) is found in Central and North America, Australia and New Zealand. The carrot psyllid lives in northern Europe, while the Bactericera trigonica psyllid inhabits the Mediterranean regions. Carrot psyllid lives in temperate and sub-arctic climates, while TPP and Bactericera trigonica psyllids live in the temperate and sub-tropical climate zones.

To stop Candidatus Liberibacter solanacearum spreading, the following measures may be used: