Chestnut Blight is a plant disease caused by a fungus which mostly affects the trunk and branches of host trees.

After an outbreak in Victoria in 2010, the Victorian government is working with the chestnut industry to eradicate chestnut blight. 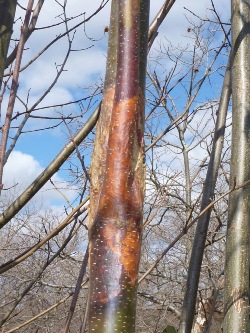 Chestnut blight is a bark-inhabiting fungus causing blight on stems and branches, and cankers that can grow rapidly.

A native fungus Holocryphia eucalypti can occasionally cause similar symptoms in chestnut trees and may be mistaken for chestnut blight.

Laboratory testing has shown Eucalyptus is also a host but this has not been observed in the field.

Cankers develop until the stem or branches are girdled, cutting off the supply of nutrients to the rest of the plant or branch. The tree will eventually become entirely infected and die.

The fungus affects the nutshell but does not affect seed germination or seedling growth.

Overseas, chestnut industries have been devastated by chestnut blight.

North American chestnut forests were severely altered by chestnut blight, causing mass tree death. It could impact native Eucalypt species in a similar way if it were to establish in Australia. Cryphonectria parasitica enters the host plant through wounds in the bark and then invades healthy tissue, forming stromas (Figure 2). Spread within the host can be rapid.

Wet weather triggers a release of large numbers of spores into the environment.

The disease can be spread on budding material or any infected trees or cuttings. It can also be spread by spores of the fungus.

Infected cut branches are also a serious risk of spread as the fungus grows more rapidly on dead wood and can produce spores for a year after cutting.

Chestnut blight was detected in north-east Victoria in 2010. An extensive eradication campaign is ongoing with monitoring to ensure no new outbreaks occur.

NSW DPI has conducted surveillance in all major chestnut growing regions in NSW with no detections.