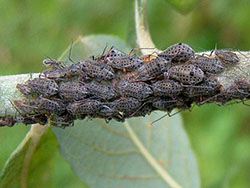 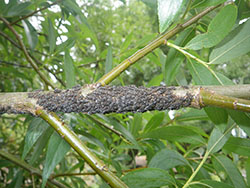 Giant willow aphids are relatively easy to see. Clusters of aphids are found on the end of branches of willow and sallow trees (Figure 1) but may also be seen on thicker inner branches (Figure 2).

Giant willow aphid is not a notifiable plant pest/disease in NSW.

Giant willow aphid sucks sap from the host tree and produces copious quantities of sugary ‘honey dew’ waste. This honeydew rain may attract wasps and other insects or cause slip hazards (Figure 3).  Honey dew will contaminate the fleece of sheep sheltering under infested trees. 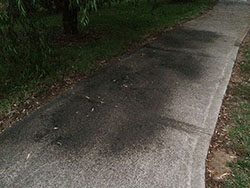 These aphids are not known to carry diseases however large colonies can lower the vigour of host plants. Giant willow aphid has reportedly killed old willow trees overseas.

Giant willow aphid is 5.0–5.8 mm long. Wingless individuals are mid-brown to dark brown with several rows of black spots on their abdomen. The body is covered with numerous fine hairs, which give a greyish-golden sheen to the abdomen. There is a large dark brown structure in the centre of the back (Figure 4). The antennae are less than half the body length. 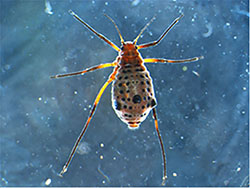 No males have been recorded in this species. Female aphids are able to reproduce without males and give birth to live young that are genetically identical. During certain seasons some aphids can produce hundreds of young in a couple of weeks but more usually one aphid produces 5–10 young a day, for 10–20 days.

Aphids form dense colonies on trunks and branches of host trees but generally not on leaves. If disturbed, aphids kick out their long back legs and wave them about.

In Britain, aphids seem to be very active during cold frosts and snow.  They spend time leaving their host plant, walking along the ground and over rocks. This aphid moves very quickly.  The winters in Australia are not likely to limit the survival of this aphid.

Winged forms of giant willow aphid are likely to fly, however flight distance is not known. All forms may be carried by water if they fall from branches into waterways.

In autumn, or when hosts become over crowded, aphids may leave the host tree and walk quickly along the ground, over rocks and man-made structures such a buildings, fences foot-bridges and along hand rails in search of new hosts.

Giant willow aphid was detected in Auckland, New Zealand in December 2013. It has now spread through most of New Zealand in both the North and South Islands.

Giant willow aphid was detected in the north of Tasmania in 2014 and has established there.

Giant willow aphid was detected in southern New South Wales and Victoria in May 2014 and is considered established.