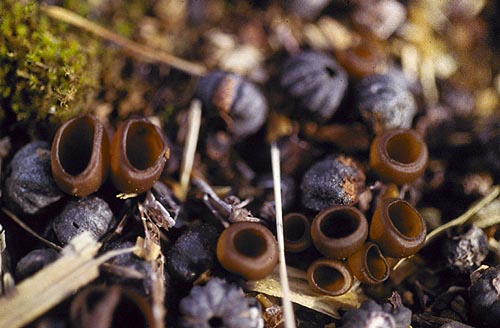 Mummy berry disease (Monilinia vaccinii-corymbosi) is an exotic plant pest not present in Australia. This disease is a serious threat to Australia’s blueberry industry.

Mummy berry is one of the most serious diseases affecting blueberry plants. The disease is caused by a fungus that attacks young shoots and ‘mummifies’ fruit. There is zero tolerance for mummified fruit in the blueberry market.

Mummy berry disease (Monilinia vaccinii-corymbosi) is not a notifiable plant disease in NSW.

Young shoots infected with the mummy berry fungus develop characteristic browning of leaf midribs in the spring. The affected leaves produce tan to grey powdery spores at the base of the leaf and along affected tissues (Figure 1).

Cup shaped fungal bodies (apothecia) are produced in spring from infected fruit that has fallen to the ground (Figure 4).

The mummy berry fungus overwinters in dropped berries on the ground before germinating in spring to produce cup shaped fungal fruiting bodies (apothecia). These fruiting bodies produce a mass of spores that are carried by wind to infect new plants. Over the growing season, spores are continually produced by fungus present in the canopy.

The mummy berry fungus may survive in mummified berries on the ground for a year or more.

Fungal spores are spread by wind and rain and can be transported longer distances on plant material, equipment, vehicles and people.

Mummy berry spores can also be spread in soil that becomes infected by mummified berries that have dropped to the ground.

Mummy berry is native to North America and occurs in many blueberry growing regions of the United States. It is also found in South America and was reported in Europe for the first time in 2003.