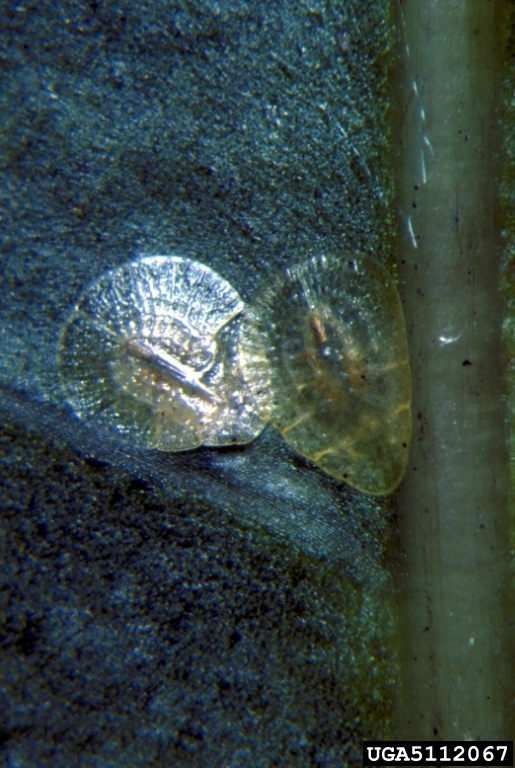 The May 2015 detection of pyriform scale in Perth is the first case of a species of Protopulvinaria scale occurring in Australia.

Scale insects have a protective coating that gives them a raised scab-like appearance on leaves. Pyriform scales have a pear shaped body surrounded by a white waxy fringe (Figure 1).

Pyriform scales feed on the underside of the leaves and secrete a clear, sugary liquid known as honeydew.

Heavy infestations of pyriform scale on plants can result in reduced vigour, leaf drop and reduction in size and quality of fruit.

Indirect damage is caused by the growth of black sooty mould on leaves. Sooty mould growth is encouraged by honeydew secreted by pyriform scales as they feed.

Female pyriform scale can reproduce asexually, laying up to 300 eggs without having to mate.

Pyriform scale nymphs emerge from eggs laid under the female’s body. Nymphs are able to crawl slowly on the leaf. They settle to feed a day or two after emergence.

Nymphs go through three growth stages before reaching adulthood. All growth stages of pyriform scale are capable of movement, though movement is minimal once feeding begins.

The number of generations completed per year is host dependent. Avocado will support two generations per year, ivy can support three and some hosts support several overlapping generations.

Pyriform scale has a wide host range of more than 100 species across 34 plant families.

Short distance spread of pyriform scale can occur when insects are blown by wind to nearby plants.

Pyriform scale is widespread throughout the USA, Central America, South America, eastern Europe and southern Africa and has been reported in Japan, Thailand and Taiwan.

Pyriform scale was first discovered in the Perth metropolitan area in May 2015. Later detections have been made on a variety of host plants in a number of surrounding suburban areas in Perth.