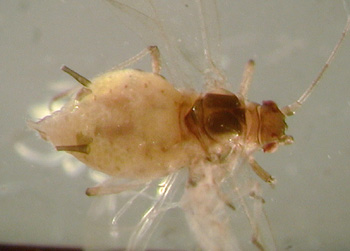 The soybean aphid is a small aphid, pale yellow in life, with black siphunculi and pale cauda (figure 3). No other aphid living on soybeans has the same combination of size and colour. Other species of aphids on legumes that might be confused with it are Aphis gossypii (the cotton aphid) which has a shorter, dark cauda and Aphis craccivora (the cowpea aphid) which has a black patch on the back of the wingless adults.

In Australia, the aphid has so far only been found on soybeans.

In China and Japan, the soybean aphid alternates between Rhamnus species (Family Rhamnaceae) and certain legumes, mainly soybean and species of Glycine but also recorded from species of Pueraria and Desmodium (Blackman et al. 1997).

A. glycines is capable of causing significant reduction in growth and seed production in soybeans. A study by Wang et al. (1996) in China found that seed yields were reduced by 27.8% and plant height decreased by 20.2 cm in infested plants as compared with the control.

In Australia experience with soybean aphid is very new. Known infestations in crops observed are distributed sporadically through a paddock and in quite small areas (1m2). Thus they can be difficult to detect. Plant damage is in the form of leaf distortion (where very dense aphid populations occur) and severe vigour loss.

The life cycle is described in Japan by Takahashi et al (1993) and in China by Wang, et al. (1962). Studies undertaken in Taiwan, Korea and Japan indicate that the optimum temperatures for the aphid are 20-24°C (see Hirano, et al. 1996). Aphid densities peak in the vegetative plant stage and decline rapidly afterwards or towards the flowering stage.

Predators include hoverfly larvae (Family Syrphidae) and ladybird larvae (Family Coccinellidae) which have been shown to play a role in suppression of A. glycines populations in soybeans (Berg, et al. 1997).

A number of parasitoids are known to be effective in helping to control numbers of the aphid. The braconid wasps Aphidius cingulatus, Ephedrus persicae and Ephedrus plagiator are effective primary parasitoids in Korea (Chang et al. 1994). Wang and Ba (1998) reviewed options for cultural and biological control of A. glycines.

Dr Victor Eastop, of the Natural History Museum, London, has given valuable advice on the identification of A. glycines.