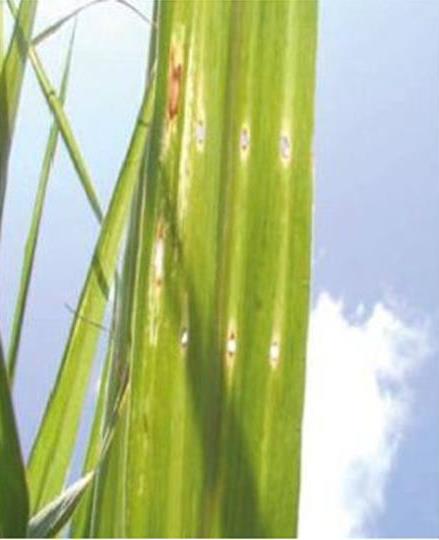 Sugarcane internode borer (Chilo sacchari-phagus) is an exotic plant pest not present in Australia. This insect is a serious threat to Australia’s sugarcane industry.

Sugarcane internode borer (Chilo sacchari-phagus) is a stem boring insect which is a serious pest of sugarcane, maize and sorghum. Its caterpillars damage these hosts by tunnelling inside their plant stems (Figure 1).

Sugarcane internode borer (Chilo sacchari-phagus) is not a notifiable plant pest in NSW.

However, if you suspect sugarcane internode borer (Chilo sacchari-phagus):

Sugarcane internode borer moths have small, yellow-brown bodies with 24-36 mm wingspans. They have 1-2 dark spots on their dull, light-brown forewings. The hindwings are dirty-white to light-brown in the male and silky-white in the female moths (Figure 2).

The caterpillars have brown heads, with two violet longitudinal stripes along their white bodies. Fully grown caterpillars are up to 30 mm long.

The flat, oval, creamy-white eggs are about 1 mm long. Clusters of 7-30 eggs are laid in 2-3 over-lapping rows on the host plants.

Sugarcane internode borer caterpillars damage their hosts by first feeding on the young leaves. They eat through the young, tightly rolled leaves, creating leaf patterns of small, scattered “shot holes” when these leaves unfurl (Figure 3). Superficial feeding by the caterpillars on the leaf surfaces can also produce small, transparent “window panes” on the leaves.

The caterpillars next feed on the plant growing points, producing “dead hearts” (the youngest still unfolded leaves wilt and die) in the stems. They bore extensive tunnels inside the stems, causing broken plant stalks and widespread crop lodging. The tunnelled stalks are also easily broken by wind.

Caterpillars also tunnel into the softer internodes at the top of plants, causing reduced growth, “bunchy top” (lateral shoot growth) and “dead tops” (death of the growing point, which can kill the plant) in infested crops. In Reunion reduced cane growth due to these pests can cause 25% yield losses in heavily infested sugarcane crops under crop protection.

Female moths lay their egg clusters on both sides of the host plant’s leaves. The eggs are also laid on the leaf sheaths. After 6-7 days incubation the eggs hatch into caterpillars.

The caterpillars are very active and can drop from the leaves on silken threads before being carried off by the wind. They feed on the leaves before tunnelling into the leaf sheaths or plant stems. Inside the plant stems the caterpillars turn into pupae. They emerge as adult moths after 7-10 days.

The female moths live for eight nights after emergence, when they mate and lay their eggs on nearby host plants. Sugarcane internode borers have six overlapping generations a year, with each lifecycle lasting 8-12 weeks.

Sugarcane internode borer is a native insect of Asia, which has since become established in Africa. It is found in eastern and southern Asia, as well as Comoros, Madagascar, Mauritius, Mozambique, Reunion, South Africa, and Tanzania.