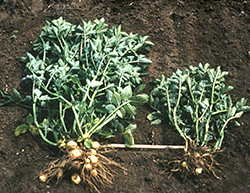 Potato cyst nematodes (PCN) are microscopic, soil-borne plant pests which feed on the roots of potato plants. Root development and tuber yield is reduced and plant growth is stunted (Figure 1).

The biology and symptoms caused by both species are similar.

The occurrence of PCN is related to the presence of a host and not to soil type or soil temperature.

PCN is subject to stringent quarantine and regulatory procedures wherever it occurs. The symptoms of attack by Globodera species are not specific. Symptoms may appear similar to water or nutrient deficiencies or wilt diseases.

Infested potato plants have a reduced root system which is abnormally branched and brownish in colour. Growth is stunted, leaves yellow early or turn a dull colour, flowering is delayed and plants may wilt.

During or after flowering very tiny white, yellow or brown cysts about the size of a pin head (0.5 mm) might be seen on the outside of roots (Figure 2).

Crop damage may appear as patches of poorly growing plants (Figure 3) and could extend to complete crop failure.

When infestations are light potato plants may show no above ground symptoms although yield and tuber size can be reduced.

When infestations are heavy both the size and number of tubers are reduced. 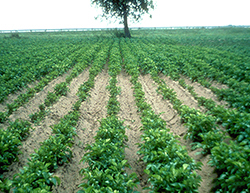 PCN are wormlike pests less than 1 mm in size.

Juveniles hatch from cysts in the soil when stimulated by the presence of susceptible host roots. The nematode then invades the plant roots.

Eggs develop in the bodies of mated females. The body of the female protrudes from the surface of the potato roots or tubers. When the female dies her body forms the resistant cyst. Cysts may contain from 200-600 eggs.

Cysts may detach and lodge in the soil. Hatching may occur immediately or cysts may remain dormant but viable for many years.

Dormancy is commonly 7-10 years but may exceed 20 years.

Laboratory analysis may be necessary to find cysts in soil samples or females or cysts on host roots.

Potato cyst nematodes can survive as cysts in the soil for many years in the absence of host plants.

The preferred host of PCN is potato. PCN can infest plants such as tomato, eggplant and some solanaceous weeds.

PCN has limited natural means of dispersal. Juveniles can move short distances towards roots in the soil. Cysts might be carried by water.

When a PCN infestation is found regulatory controls are imposed on potato growers and all businesses which involve the potential movement of soil. 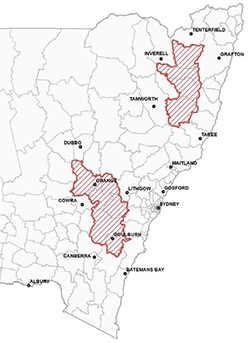 Pale PCN and golden PCN are both endemic to the Andes Mountains in South America. PCN has been introduced into Europe, North America, Asia and Africa.

Pale PCN has been confirmed in New Zealand.

Golden PCN is established in parts of Victoria and has been eradicated from Western Australia.

PCN was first discovered in parts of Victoria in 1991 on the outskirts of Melbourne and has since become established in several other areas within Victoria.

Biosecurity zones and procedures have been established in Australia to prevent the spread of PCN from known infested areas to regions and states currently free of PCN.

Each state or territory has their own regulations in place to prevent the introduction of PCN or control its spread. For specific import conditions, contact the relevant state authority.

NSW is currently free of PCN. The introduction of potatoes or soil into NSW is strictly regulated.

The Biosecurity Regulation 2017 prescribes a potato biosecurity zone PNG, 587.99 KB to manage and control the associated biosecurity risks. This zone includes two seed potato protected areas (SSPA, marked in red on map above). No potato propagative material, soil, associated packaging and machinery or diagnostic samples can be brought into a SPPA from an area outside a SPPA (including the rest of NSW) unless certified as having met SPPA specific import conditions as prescribed in the Biosecurity Order (Permitted Activities) 2017.

Surveillance for PCN can range from regular monitoring carried out on individual properties to targeted surveillance programs across regions.

PCN surveillance is carried out by taking samples of soil or roots. Visual symptoms alone can’t be used to identify PCN. Its microscopic size requires laboratory analysis of soil samples or the roots of potato plants to conclusively confirm the presence or absence of PCN.

NSW claims area freedom from PCN based on historical absence, specific surveys and general surveillance. Fields used to grow seed potatoes in NSW must be surveyed for PCN on a regular basis to maintain market access.

Regulations concerning the movement of potatoes and materials associated with PCN risk should be observed at all times.

Preventative measures that can be carried out on individual properties include:

At present there is no effective way to completely eradicate PCN from infested soil.

A number of management practices aim to keep PCN numbers in soil below the damage threshold.

Crop rotation with non-host crops is an effective strategy to reduce nematode numbers in infested soil by breaking the lifecycle.

The length of the rotation and the crops used can have variable effects on PCN numbers. Crop rotation cannot completely eradicate PCN as nematode cysts remain dormant in soil in the absence of host plants. Dormancy is commonly 7-10 years but may exceed 20 years.

Tomato and eggplant crops may also increase PCN levels and therefore should not be used in a non-host rotation.

A ‘trap crop’ is a PCN host crop that is grown temporarily before the commercial crop. The presence of the trap crop encourages existing eggs in the soil to hatch and the young nematodes to penetrate the roots.

Before the nematodes mature and have a chance to increase the population by laying eggs the trap crop is removed and destroyed (usually 6 to 7 weeks after planting). This removes the young nematodes from the soil, effectively reducing the nematode population density for subsequent host crops.

If crop destruction is left too late, the nematode density will increase.

Growing a cultivar which has resistance to PCN is a more effective way to reduce PCN soil populations compared to just using a non-host crop rotation.

Resistant cultivars can cause up to 90% of PCN eggs in the vicinity of potato plants to hatch and although the juvenile nematodes will still invade the roots they do not develop further. This interrupts the lifecycle and reduces the number of cysts in soil over a season by up to 90%.

Soil fumigant nematicides are useful for quickly reducing large populations of PCN that have built up in soil due to continuous host cropping.

Soil fumigants can kill large numbers of nematodes. However, conditions of soil type, moisture content, drainage and temperature can influence the effectiveness of fumigation. There can also be associated risks of ground water contamination and residual toxicity to plants.

Soil fumigant nematicides are a toxic and expensive control method. Many chemicals previously used for nematode control have now been banned, or are in the process of being phased out due to safety concerns or their effect on the ozone layer.

Soil solarisation is an effective control method for nematodes in hot climates. The soil is covered with layers of polyethylene sheeting and the soil beneath is heated by the sun to temperatures of 60°C or more. The high temperatures effectively kill nematodes and their eggs.

The Biosecurity Regulation 2017 prohibits the movement of potatoes, soil and associated packaging or machinery into NSW unless certified as having met specific import conditions. These conditions are specified in the Biosecurity Order (Permitted Activities) 2017.