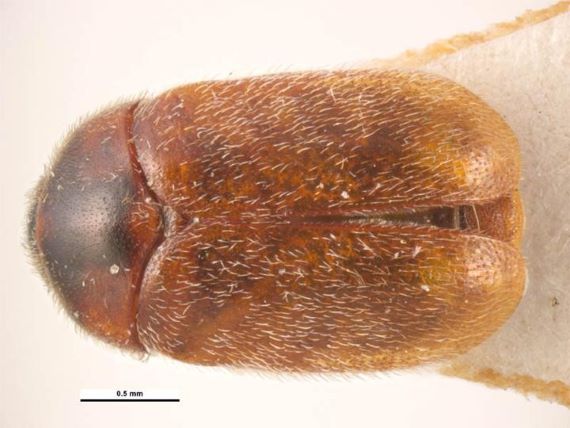 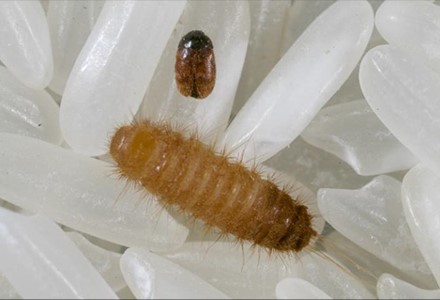 Khapra Beetle (Trogoderma granarium) is a serious pest of stored grain and dry foodstuffs worldwide. It can cause stored grain losses of up to 75% from direct feeding. Infested grain can also become contaminated with beetles, cast skins and hairs from larvae that are difficult to remove from stored grain and transport vessels, and can be a health risk.

Khapra Beetle is exotic to Australia. If it were to become established here it would pose a serious threat to Australia’s grains, dried fruit and nut industries.

A second, more recent detection was in a consignment of highchairs imported from Italy. Tracing, inspection and treatment of the highchairs that were distributed to retail outlets and on-sold across Australia, is still occurring.

All notifiable plant pests and diseases must be reported within 1 working day.

You can report notifiable plant pests and diseases by one of the following methods:

Adults are small at around 2-3mm long and 1-2mm wide. They are brownish in colour with a smooth oval shaped body. Adult beetles have many fine hairs and indistinct markings on their wing covers. When viewed from the side (figure 2), the adult beetle’s partly concealed head and downward facing mouthparts can be seen.

Eggs are less than 1mm long and milky white to pale yellow. They hatch into small hairy larvae that can range from 1.6-5mm long, are golden brown in colour and darken as they mature.

Larvae range from 1.6-5mm long when fully mature, are golden brown in colour and have distinctive hairs across the body, including longer hairs at the rear end that resemble a tail (figure 3).

Pupae have a smaller appearance to late stage larvae except that they are slightly shorter and more rounded.

Khapra beetle is almost identical to warehouse beetle, which is established in Australia, and some closely related native beetle species. If you find any beetle or hairy larvae fitting the description of the khapra beetle, report it immediately to have it identified by an expert.

Adult male and female beetles mate immediately after emergence. Adult females begin laying eggs shortly after mating, in or near host material and generally lay 50-100 eggs during their lifetime.

Eggs hatch within 5-7 days into larvae. This is the major feeding stage and therefore the most damaging. Larvae moult four or more times, resulting in numerous cast larval skins. The larval development stage may be as short as 30 days, however larvae can survive in a dormant state for many years in unfavourable conditions.

Khapra beetle is found in India, Middle East, Asia, Africa and Europe. It spreads through shipments of imported grain and other foodstuffs, personal effects, machinery, straw and packaging.

Khapra beetle is generally a pest of stored grain however it can stowaway as a hitchhiker on a wide range of cargo including plastic beads, nuts and bolts, timber flooring, foodstuffs and white goods.

It is important to check your new item and all packaging for any signs of pests or anything unusual. Preferably open the packaging inside in a semi-confined space so that if you do see something unusual you can capture and or isolate the insect/s straight away.

They are likely to be found where stored products are kept or transported and can also be found between cracks and wall linings of your home or in storage containers. Help us keep New South Wales free of khapra beetle and report any possible sightings to the Exotic Plant Pest Hotline on 1800 084 881.

Put in place biosecurity best practice actions to prevent the entry, establishment and spread of pests and diseases: