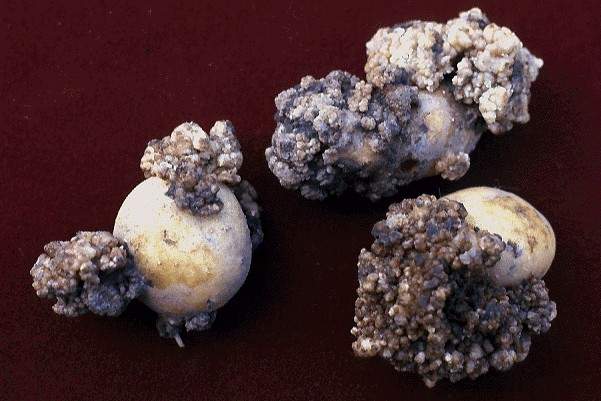 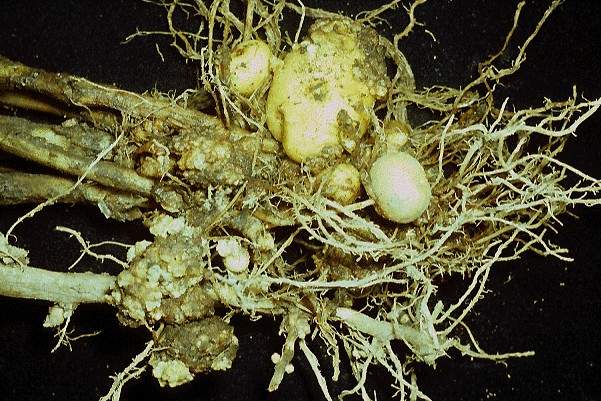 Potato wart is a soil-borne fungal disease of potatoes. Potato wart mainly appears on underground stolons and tubers. It does not occur on the true roots of the potato plant.

The presence of the disease may not be noticed until the potato tubers are harvested.

Potato wart (Synchytrium endobioticum) is an exotic plant pest not present in Australia. This disease is a serious threat to Australia’s potato industry.

On infected tubers the eyes develop into warty, cauliflower-like swellings (Figure 1). Warts are initially the same colour as the tuber and then turn black as the fungus matures. Warts that become exposed at or just above the soil line become green (Figure 2).

Wart size varies from small growths to large multi-branched swellings that may engulf the whole tuber. Tubers may bear more than one warty outgrowth (Figure 3). Tubers may become disfigured or unrecognisable when they are infected early in their development.

Symptoms associated with potato wart may appear similar to some of the symptoms caused by powdery scab, potato smut and ‘pseudo-wart’. Proper identification and laboratory analysis is required to confirm the presence of the potato wart pathogen.

Potato wart symptoms can continue to develop during storage. Dried out warts barely noticeable at harvest may become increasingly obvious during prolonged storage.

The potato wart fungus does not usually kill the potato plant. If tuber sprouts are attacked by the fungus shoots may fail to emerge from the soil.

Resting spores of potato wart are capable of surviving in soil for over 30 years and at depths of over 50 cm.

Long distance spread occurs through the movement of infected soil and by infected seed tubers.

The only cultivated host of potato wart is potatoes.

In Mexico wild potato species (Solanum) can be infected.

Under laboratory conditions a number of solanaceous plants including tomato have been artificially inoculated.

Potato wart originates in the Andean zone of South America. It is thought to have been introduced on breeding material to Europe after the Irish potato famine of 1840-50.

In New Zealand potato wart is restricted to home gardens in the Southland region.