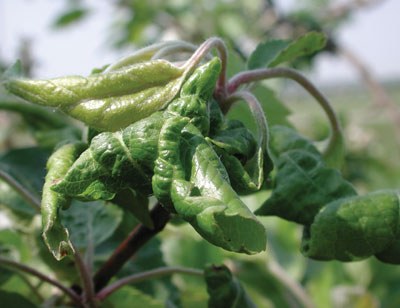 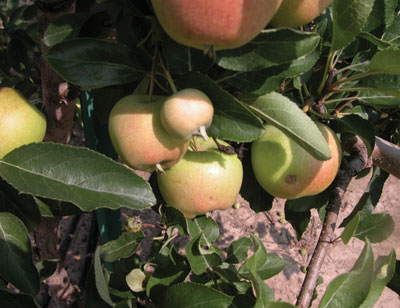 Rosy apple aphid (Dysaphis plantaginea) is an exotic plant pest not present in Australia. This pest is a serious threat to Australia’s apple industry.

Rosy apple aphid is a major pest of apple trees in Europe and North America.

The aphid is named because the adult’s body is covered with a light waxy coating which is usually tinged a slight purplish or rosy colour.

The lifecycle of the rosy apple aphid involves migration between two hosts, apple trees and the ground weed plantain.

Rosy apple aphid (Dysaphis plantaginea) is not a notifiable plant pest in NSW.

The saliva of rosy apple aphid contains a toxin which is injected into a leaf while feeding. The toxin causes apple leaves to curl diagonally from the leaf tip to the leaf base (Figure 1).

Leaf curling does not become obvious until petal fall.

Aphid feeding on the leaves of fruit clusters results in bunching, stunting and malformation of the fruit (Figure 2).

Honeydew is produced as aphids feed and this provides a food source for the growth of sooty mould. Sooty mould reduces plant vigour and blemishes the appearance of fruit.

As the aphids grow their colour changes to a rosy brown or purple (Figure 3) and they acquire a powdery white covering.

Eggs are a pale green when first laid then turn a shiny black when mature. Egg size is 0.5 mm and football shaped.

Rosy apple aphid begins to produce eggs in the autumn and continues to do so until cold temperatures kill all the females. Eggs are laid on twigs, bud axils or in bark crevices.

The aphid overwinters in the egg stage.

The overwintering eggs give rise to only female aphids which give birth to live young.

The aphid population continues to increase on apple until summer. Winged aphids are then produced which migrate to other hosts, such as plantain weeds.

The population of winged rosy apple aphids survive on the alternative hosts over summer and early autumn.

In the late autumn the winged aphids migrate back to apple trees to lay eggs.

The primary host of rosy apple aphid is apple. Minor hosts include pear and hawthorn.

In summer the rosy apple aphid moves from apple trees to weeds such as plantain. Plantain weeds are common in New South Wales.

Rosy apple aphid requires the presence of plantain weeds such as ribwort to act as host for the summer generations and to enable completion of its lifecycle.

Rosy apple aphid is native to Europe, the Middle East and Central Asia.

Rosy apple aphid has been introduced to North and South America.

Natural spread of rosy apple aphid is by flight or wind assisted dispersal.