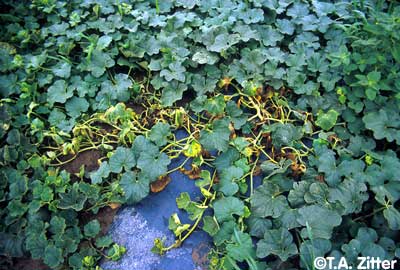 There are a number of different strains of fusarium root rot throughout the world. We have some strains already present in Australia, however, different strains generally affect different host plants and so remain a threat to biosecurity. There are also exotic races of the species we already have that have evolved overseas and can be more aggressive or harder to manage with regular control methods.

Exotic strains of fusarium root rot in melons is not a notifiable plant disease in NSW.

However, if you suspect exotic strains of fusarium root rot in melons:

Fusarium root rot, or fusarium wilt, infects the roots of plants at all stages of crop development.

Initially, the lower leaves of plants infected with fusarium root rot show signs of wilt at midday, only to recover during the evening and at night (Figure 1). As the disease progresses, the wilt advances to affect all leaves followed by symptoms of yellowing, leaf death and stunting of mature plants.

In mature plants, the wilt may initially be confined to particular tendrils if only a section of the root system is infected.

Cross sections cut from the roots and lower stems of infected plants show brown discolouration of the inner tissues.

A field infected with fusarium root rot will show patches of affected plants where the fungus occurs and is spreading in the soil (Figure 2). The development of fungal spores can be found on dead stems in wet weather.

In less severe infections plants may survive but become stunted and have reduced yield.

There is no known treatment for fusarium root rot and once established in the soil the fungus is able to survive without a host plant for several years. Fields may become unsuitable for production unless resistant varieties are planted.

The fusarium fungus grows through the soil until it comes in contact with host plant roots.

As the plant dies, the fusarium wilt fungus grows out onto the surface of leaves and stems where it produces fungal spores.

Spores are returned to the soil as diseased plant material decays. Spores can remain dormant in soil for several years before infecting a new host.

Fusarium root rot spreads locally by growing through the soil from one host plant to another and by spores in the soil. This is a relatively slow process, though fungal dispersal may be aided by on farm activities moving infected soil with people and machinery, or by loose soil being carried in rain runoff.

Fusarium root rot is widespread in melon growing regions throughout the world, including Australia.

However, there are more damaging versions of the disease known to occur overseas that we don’t have in Australia; strains that have evolved in isolation that can be more aggressive than established strains.