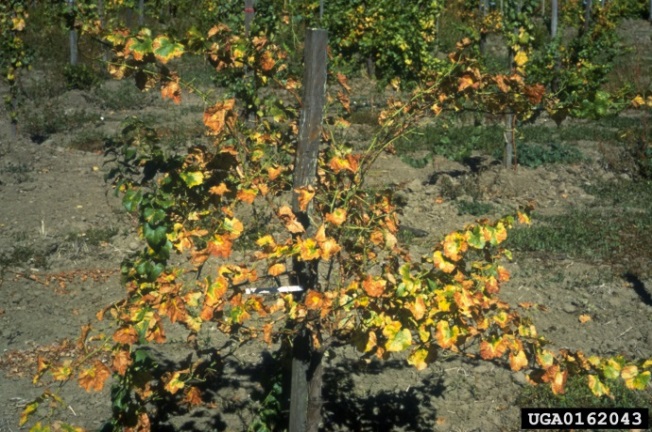 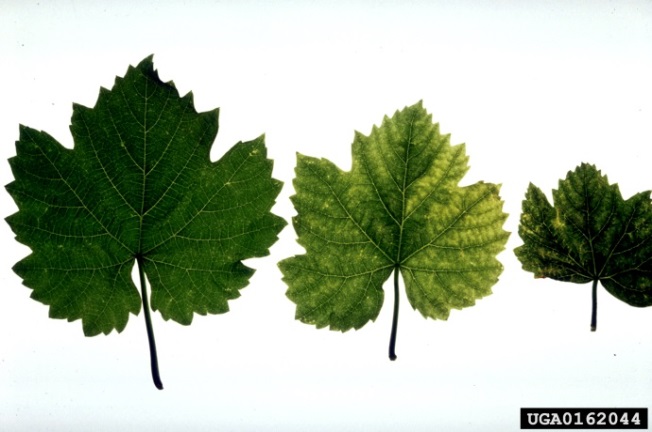 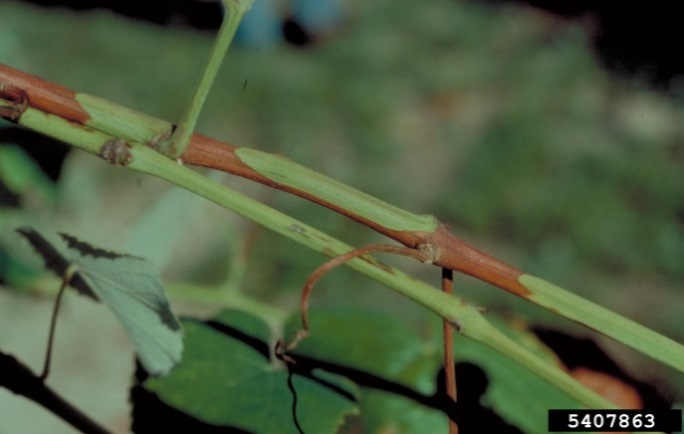 Pierce’s disease (Xylella fastidiosa) is an exotic plant pest not present in Australia. This plant disease is a serious threat to Australia’s grape and wine industries.

Pierce’s disease is a bacterial disease caused by Xylella fastidiosa. This bacterium lives in the water-conducting system (xylem) of the grapevine and is spread from plant to plant by sap-feeding insects. Glassy-winged sharpshooter, an exotic plant pest is a key vector.

The characteristic symptom of Pierce’s disease in grapevines is leaf scorch (Figure 1). Leaves become yellow around the leaf margins or between the veins. The outer leaf area may dry suddenly while the rest of the leaf remains green. Affected leaves are less vigorous and smaller than healthy leaves (Figure 2).

Leaves dry progressively over a period of days to weeks. Concentric zones of discoloured and dead tissue are seen. The whole leaf may shrivel and drop leaving only the leaf stalk attached.

Diseased stems often mature irregularly, with patches of brown and green tissue. These are known as ‘green islands’ (Figure 3).

Flower clusters on infected vines may set berries but these usually dry up before reaching maturity.

Leaf symptoms vary with the grapevine species and cultivar.

Grape varieties such as Pinot Noir and Cabernet Sauvignon show regular zones of progressive leaf margin discolouration and drying. Discolouration and scorching in the variety Thompson Seedless occurs in sectors of the leaf rather than as rings around the margins.

Symptoms are usually more obvious in grapevines that are stressed by high temperatures or drought conditions. Climatic differences between regions can affect the timing and severity of the symptoms but not the type of symptoms.

Pierce’s disease can kill grapevines by blocking the plant’s water conducting system. Susceptible grapevine cultivars can die within one to two years of the initial infection.

In the first growing season after being infected only one or two canes may show symptoms. Symptoms gradually spread along the cane from the point of infection to the tip and more slowly towards the base of the cane. Some or all of the fruit clusters on the infected cane may wilt and dry out. Tips of canes may die back and roots also may die back.

In the following year some canes may fail to bud out. New leaves are yellow and older leaves appear scorched. Infected vines may grow at a normal rate but the quantity of new growth is less than that of healthy vines. In late summer leaf scorching symptoms reappear.

The bacterium Xylella fastidiosa affects a wide host range of agricultural and ornamental plants. Some hosts are symptomless.

All sucking insects that feed on xylem sap are potential vectors of Xylella fastidiosa.

Pierce’s disease is not transmitted through contaminated pruning equipment or by seed transmission.

There is no cure for Pierce’s disease.

Prevention is the best option for the management of Pierce’s disease.

Removal of infected vines and vector control are used in California to reduce disease spread.