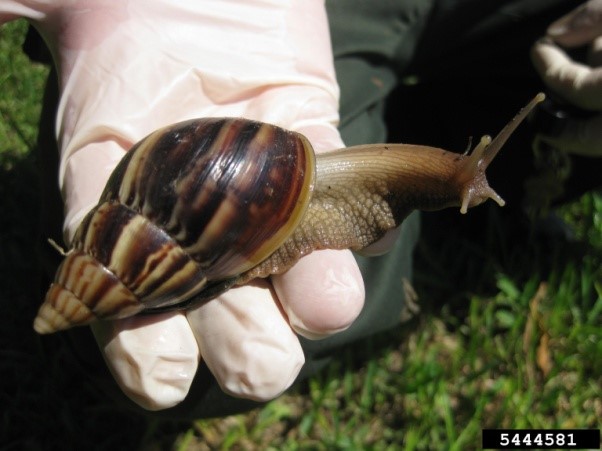 It prefers warm tropical conditions but can survive temperatures lower than 2°C and higher than 30°C by becoming dormant.

Sunshine will kill Giant African snail so it is mostly active at night time. During the day the snail burrows underground or retreats into its shell.

Giant African snail will eat over 500 different plant species. Most damage is caused to vegetable crops, flowers and other ornamentals.

Internationally there is interest in GAS as a meat product and it is marketed in Europe and America. However GAS meat has been reported to transfer bacteria and parasites to humans if raw or poorly cooked snail is consumed. Disease transmission is also possible if snails are handled with bare hands.

Giant African snail is a nuisance to humans when large infestations occur due to the stench that emanates from dead snails.

The shell is conical, tapering to a point, with      7–9 whorls when fully grown.

Shell colouration is affected by environmental conditions as well as genetic variability of the source of the population. Shells are sometimes described as light brown with dark brown stripes while at other times described as reddish brown with weak yellowish vertical markings.

Giant African snail is hermaphroditic. Both partners of a mating pair will produce offspring as they can simultaneously fertilise each other.

Lifespan is generally 3–5 years but periods of hibernation can prolong life up to 9 years.

Sexually mature after 6 months, GAS can lay over 1000 eggs in a lifetime. In ideal conditions, eggs will hatch 11 days after being laid.

Highly adaptive to a wide range of conditions, giant African snail will modify its lifecycle to suit the local environment.

Although GAS can move up to 50 m overnight, on average it will not move more than 250 m in one year.

Trade and transport are the main mechanisms of human assisted long distance dispersal. Giant African snail has been found attached to shipping containers and machinery. Eggs have been found in soil associated with imported goods.

Giant African snail is native to coastal east Africa but is now found across Asia, the Pacific, the Americas and Europe.

Within Australia, GAS has established on Christmas Island but is kept at low population levels due to predation by native red crabs. On the mainland GAS has been intercepted and destroyed at port facilities.