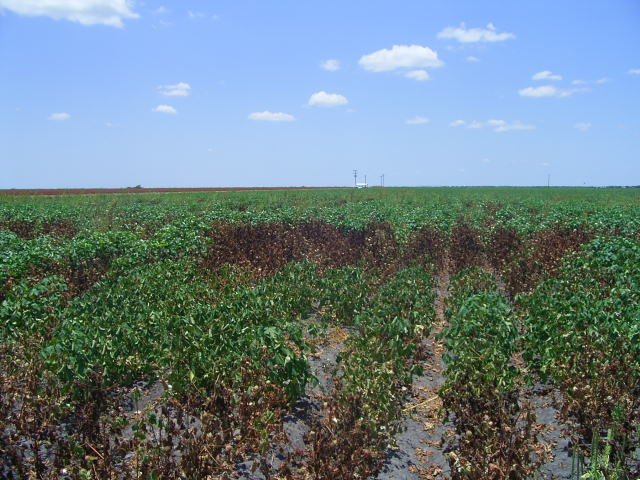 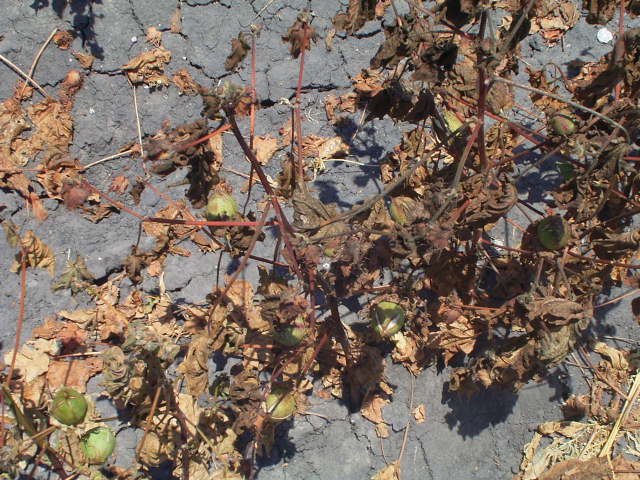 Texas root rot (Phymatotrichopsis omnivorum) is an exotic plant pest not present in Australia. This disease is a serious threat to Australian agriculture including cotton, grape, nut, citrus and stone fruit industries.

Texas root rot infects the roots of plants, causing sudden and severe wilting of the whole plant. Affected areas of an infected field often appear as circular patterns of dead plants, resembling lightning strike damage but which gradually spread outwards as the fungus spreads through the soil from plant to plant (Figure 1).

There is no known treatment for Texas root rot and once it is established in soil the fungus is able to survive without a host plant for more than 5 years.

The first symptoms of Texas root rot appear with increasing temperatures in summer when a sudden wilting of the plant occurs. Wilting may or may not be preceded by the discolouration of leaves to yellow or bronze.

By the time wilting occurs, roots are usually extensively invaded by the fungus. Internal discoloration of cut roots and lower stems can often be found in infected plants.

Texas root rot causes the most damage in cotton crops. Cotton plants infected with Texas root rot are subject to sudden, severe wilting and often death before reaching maturity. Infected plants that manage to survive until harvest produce poor quality fruit. In orchards, tree death may occur more slowly. Losses of established trees in an orchard have been reported to exceed 50%.

The Texas root rot fungus grows through the soil until it comes in contact with roots of susceptible host plant. The fungus destroys the root cortex (bark) and enters the root to obtain nutrients from the plant. Growth of the fungus inside plant roots and stems blocks the supply of water to the plant.

Following the death of the plant, storage bodies (sclerotia) are formed by the fungus and act as food reserves to sustain Texas root rot until another susceptible host crop is planted or an alternative host is found. Sclerotia can enable Texas root rot to survive in fallow soil, or amongst non-host species for several years.

Cotton is a preferred host though the fungus will also develop on a number of other commercial field crops, vegetable crops, fruit, ornamental and forest trees and weeds.

Texas root rot is spread over long distances in contaminated soil. Contaminated soil can be carried on the roots of host plants, boots and clothing, vehicles, machinery and equipment.

Natural spread of Texas root rot is a relatively slow process via the growth of the fungus through the soil from one host plant to another. Dispersal of the fungus can be aided by farm activities moving infected soil, or by loose soil carried in rain runoff.

Texas root rot originated in Mexico and south-west USA. The fungus has since spread to Brazil and Venezuela in South America, and Libya in north Africa.