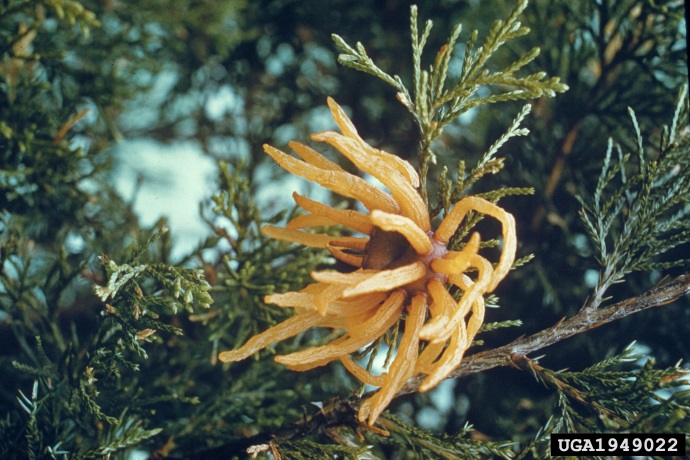 Cedar apple rust (Gymnosporangium juniper-virginianae) is an exotic plant pest not present in Australia. This disease is a serious threat to Australia’s apple industry.

Cedar apple rust (Gymnosporangium juniper-virginianae) is not a notifiable plant disease in NSW.

However, if you suspect Cedar apple rust:

The telial horns are made of a gelatinous material that swells so that a gall covered with telial horns may reach 6-8 cm in diameter.

Lesions formed on the underside of the leaf produce hairlike structures which protrude releasing spores. Leaf material thickens around the protrusions making the lesions appear cuplike in shape. These cup shaped lesions can also develop on immature apples. Infected fruit is dwarfed and malformed.

The disease cycle of the cedar apple rust fungus is complex. Two very different types of host plants, cedar pine trees and apple trees, are required for the fungus to complete its lifecycle.

Cedar pine leaves are infected in summer by spores blown from lesions on apple leaves.

Small greenish brown galls appear the following summer but do not enlarge and mature until the following spring. The large galls on the cedar pine are sometimes called “cedar apples”.

After spring rains occur the galls form gelatinous protrusions. These protrusions (horns) produce spores which are windborne onto apple trees. The fungus establishes on its alternate apple host and completes its lifecycle.

Build up of the disease within a season in an apple orchard occurs by spores produced on upper surfaces of apple leaves.

Spores are windborne and are spread by prevailing winds within and between apple orchards and to the alternate cedar pine host.

The alternate hosts are members of the genus Juniperus which includes eastern red cedar (J. virginiana) as well as many ornamental junipers.