Blueberry rust (Thekopsora minima) is a fungal disease which infects the leaves and fruit of blueberries and related plants in the Ericaceae plant family.

The initial symptoms of blueberry rust usually appear midseason on the leaves of host plants.

Small yellow spots develop on the upper surface of leaves. As the infection progresses the spots grow and darken to a rust brown colour (Figure 1), often surrounded by a yellow halo.

On the underside of leaves, yellow pustules of powdery fungal spores develop (Figure 1). These pustules turn rusty red with age.

Infected leaves may curl and in severe cases the entire leaf will eventually die as the spots merge and become necrotic. 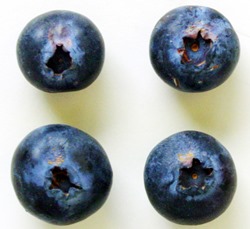 Severe cases of blueberry rust can lead to premature leaf drop. The loss of leaves reduces plant vigour, leading to a decline in yield and a reduction in flowers the following season.

Severe blueberry rust infection may lead to the death of susceptible plants.

Spores released from the pustules further infect blueberry leaves in a repetitive cycle. New pustules are generally produced every 10–14 days, though this can occur more rapidly under favourable conditions.

In mild climates such as Australia's, blueberry rust survives over winter by persisting on host leaves that remain evergreen. It does not require an alternative host as it would in colder climates overseas.

The following plants are considered hosts of blueberry rust in Australia and have associated movement restrictions in some states:

Blueberry rust spores are very easily and quickly spread to nearby plants by wind and rain.

Blueberry rust has been reported in Europe, Argentina, Asia, Mexico, Canada, the United States and Australia.

Blueberry rust has been present in parts of NSW and Queensland for many years.

Blueberry rust was detected in the Melbourne metropolitan area towards the end of 2014. This was the first instance of the disease occurring in Victoria. Spread of the disease has currently been contained, though the Victorian government is remaining vigilant for any further detection.

Blueberry rust was also detected in Tasmania towards the end of 2014, with all infected plants subsequently destroyed under Tasmania’s biosecurity protocols.

Blueberry rust has been present in NSW for many years and there are currently no import conditions or restrictions applied to the movement of host plants in NSW.

Blueberry rust is not reportable in NSW, however, quarantine boundaries and procedures have been established to prevent the spread of blueberry rust from known infested areas to other states currently free of the disease.

Interstate import requirements should be considered prior to any movement of blueberry rust host material. Further information is available by contacting the relevant state authority.

Blueberry rust can be managed with fungicides or by planting tolerant varieties.

The removal of alternative or volunteer host plants that may harbour the disease can be beneficial in reducing sources of blueberry rust spores.

Put in place biosecurity best practice actions to prevent entry, establishment and spread of blueberry rust onto your property: