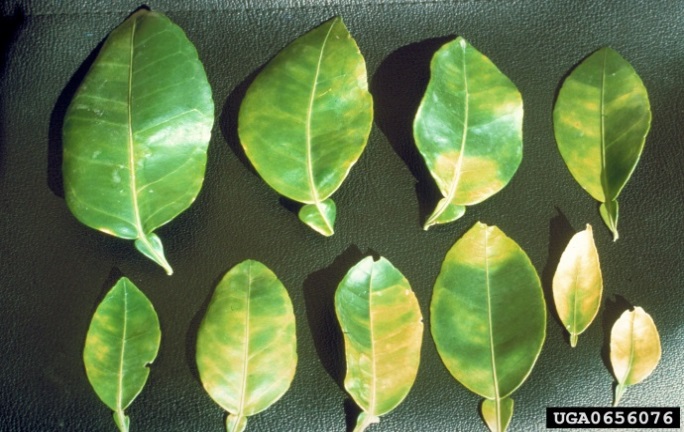 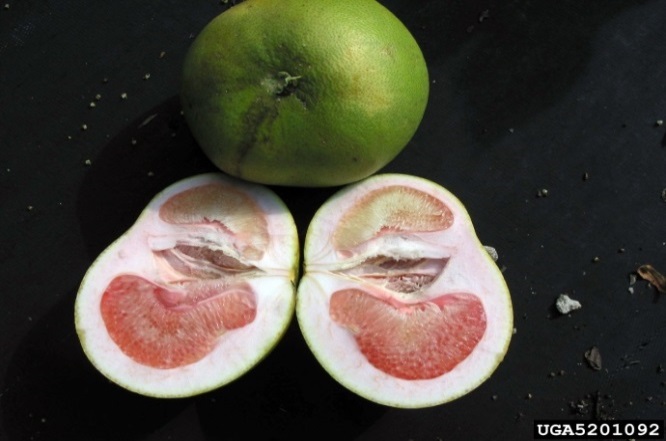 Huanglongbing (Candidatus Liberibacter asiaticus) is an exotic plant pest not present in Australia. This plant disease is a serious threat to Australia’s citrus industry.

Huanglongbing is a bacterial disease affecting citrus and other Rutaceae. The disease is also called citrus greening.

All growth stages of a citrus tree and all plant parts are affected by huanglongbing. Seedling, vegetative, flowering, and fruiting growth stages are susceptible to the disease.

Affected plant parts are leaves, stems, flowers, fruit and roots. Symptoms include yellowing of leaves, dieback of branches and stems and distorted and discoloured fruit.

Three regional types of “Candidatus Liberibacter” which cause symptoms of huanglongbing in citrus have been identified.

The first symptom of huanglongbing is usually a yellow shoot in the tree canopy. Progressive yellowing of the rest of the canopy follows. Affected leaves appear blotchy and mottled or are small, upright thickened and chlorotic (Figure 1).

Fruit production is poor on affected trees and affected fruit is small, lopsided in shape (Figure 2) and bitter tasting. If seeds are present they are small dark coloured and infertile.

Development of fruit colour is uneven particularly in sweet oranges and mandarins in temperate and subtropical areas. The bottom end of the fruit remains green while the stalk end turns orange (Figure 3).

Huanglongbing is a plant disease. It is not harmful to people or animals. Affected fruit is safe to eat although it may taste bitter.

All species and cultivars of commercial citrus can be affected by huanglongbing. Many plants in the Rutaceae family, including Australian natives, are susceptible to infection.

Candidatus Liberibacter asiaticus is found in many countries throughout Asia including Australia’s close neighbours Indonesia, East Timor and New Guinea.

Candidatus Liberibacter asiaticus has spread to the Middle East, South and Central America and the United States.