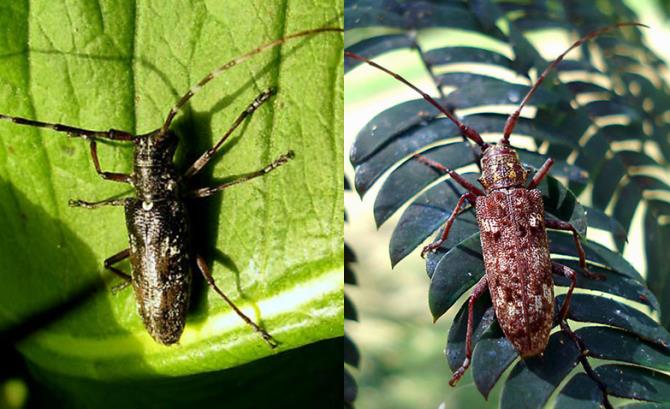 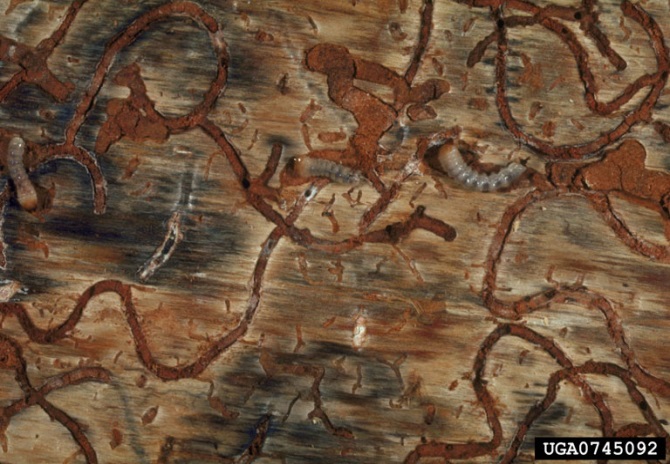 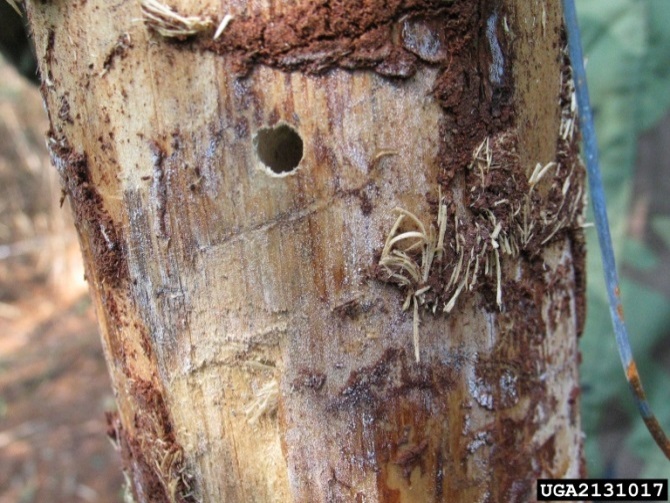 Sawyer beetles (Monochamus spp.) are not present in Australia. These pests are a serious threat to Australia’s forestry industries.

Sawyer beetles include beetles of the genus Monochamus. Introduction of these beetles is of concern to Australia due their role as a vector of pine nematode (Bursaphelenchus sp.), and the nematodes’ devastating impact on pine species.

Sawyer beetle adults are large, long-bodied beetles up to 30 mm in length. They vary in colour from mottled black, brown–grey to reddish brown with very long antennae up to twice as long as the body length (Figure 1).

Sawyer beetle larvae are legless, creamy white grubs found tunnelling beneath the bark. The larvae excrete frass (sawdust-like poo) which can be seen compacted in the larvae tunnels under the outer bark (Figure 2).

The eggs are about 4 mm in size, oval and yellowish-white, sometimes with a hint of brown.

On their own, sawyer beetles have very limited impact on infested host trees. The real damage risk comes from the sawyer beetles’ potential to carry and spread exotic species of pine nematode (Bursaphelenchus spp.).

Once introduced to a host tree by sawyer beetles, pine nematodes move through the tree in the water transport system. The feeding of nematodes on plant cells causes air pockets to form, disrupting water uptake by the tree. This leads to rapid death of the tree, often within a few weeks or months.

The lifecycle of sawyer beetles is relatively slow, with one generation taking 1–2 years. The adults are sexually mature around one week after emerging from their pupa, though females require an average of three weeks to begin depositing eggs.

The eggs of sawyer beetles are laid into the bark of dying or felled host trees. Upon hatching, the larvae tunnel and feed through the inner bark, growing through four development stages before pupation.

When the adult emerges, it chews an exit hole about 9 mm in diameter in the bark of the tree (Figure 3). The adults live for about seven weeks on average.

Sawyer beetles may be introduced to Australia as eggs, larvae or adults concealed within raw timber materials. This could include whole plant parts, timber for construction, timber packaging, wood chips or any other material produced from host trees.

Species of Monochamus are currently restricted to the northern hemisphere, including North America, Asia and Europe.