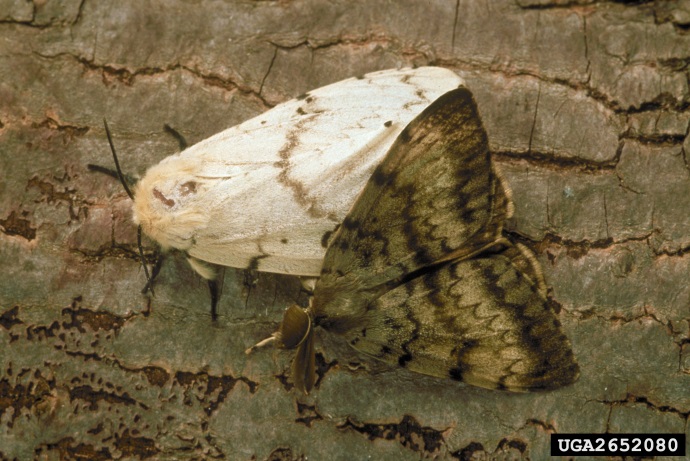 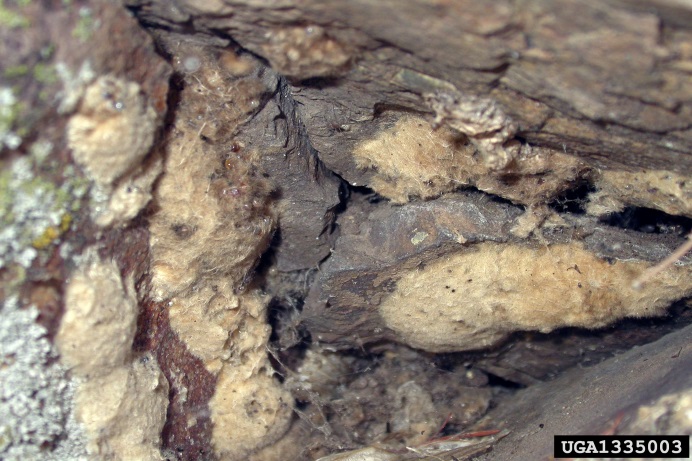 Asian gypsy moth (Lymantria dispar) is an exotic plant pest not present in Australia. This pest is a serious threat to Australia’s forestry and horticultural industries.

Asian gypsy moth caterpillars can feed on the leaves of over 600 tree species. In countries where the moth is established, the species undergoes periodic outbreaks every 5–10 years causing significant damage to forests for 2–3 years at a time.

Larval feeding damage on host plant leaves is the most obvious symptom of Asian gypsy moth attack. Feeding damage appears as holes in the leaves or irregular leaf margins. As larvae grow, whole leaves may be consumed. Each larva consumes about 1m2 of leaves in its life time.

Large, eruptive populations of Asian gypsy moth occur in cycles every few years. Stress associated with feeding damage can result in reductions in tree growth, dieback and tree death. Tree death is often associated with other insects and pathogens that attack the stressed trees.

Adult male and female Asian gypsy moths are different in appearance (Figure 1). The male moths are grey to brown in colour with dark wavy patterning and a wingspan of 30–40 mm.

The female Asian gypsy moth is larger than the male and appears more slender in body shape when at rest. The female colouring is primarily white with dark wavy patterning and has a wingspan of around 40–70 mm .

Asian gypsy moth larvae are very hairy and can grow to 70 mm long. Mature larvae are light to dark grey in colour with flecks of yellow. A distinctive double row of coloured spots runs the length of the body: five pairs of blue spots followed by six pairs of red (Figure 2).

Eggs are spherical, grey and 1 mm in diameter. Eggs are deposited in egg mass clusters about 2–3 cm in size. Each egg mass may contain 50–1200 eggs.

Eggs are laid on hard surfaces, usually tree trunks or branches, but also on rocks, walls, fences etc. The egg masses are covered with yellowish or tan fuzz from the abdomen of the female (Figure 3).

Asian gypsy moth larvae emerge at the end of spring after overwintering as egg masses. Newly hatched larvae generally remain on the egg masses for 1–2 days before climbing into branches to feed or disperse.

Larvae undergo 5–6 development stages while continuing to feed. Pupation occurs in the middle of summer on leaves and branches.

Adults emerge over the end of summer and beginning of autumn. Males emerge one or two days before females. At emergence both sexes are fully mature. In some overseas countries the females are flightless and attract males to mate with pheromones. Females mate once and deposit a single egg mass of 50–1200 eggs on hard surfaces and cover with a protective coating of fuzz.  Adult moths do not feed and live for less than a week.

Asian gypsy moth has an extremely wide host range. They are known to complete their lifecycle on more than 600 species of plants including Australian native species, forest, orchard and ornamental trees.

Asian gypsy moths are dispersed naturally either by adults flying (up to 40 km) or by wind dispersal of young larvae on silk webbing. Larvae move into the branches of a tree, spin a thread of silk and suspend themselves from the threads which eventually break. The larva is then carried by the wind. While most larvae will not move more than 200 metres, some are reported to travel several kilometres.

Long distance dispersal of Asian gypsy moth can occur with the movement of plant material infested with eggs or larvae, or on packaging and vessels. Adults are readily attracted to lights and have been observed in the vicinity of ports where they could lay eggs in or on structures to be transported.

Egg masses have been found on logs, outdoor furniture, nursery stock, pallets, shipping containers and on the hulls and rigging of ships.

Asian gypsy moth biotypes are native to and occur throughout Europe and Asia.

Lymantria dispar asiatica occurs throughout temperate Asia into east Russia, the northern two thirds of China, and the Korean Peninsula. In Central Asia, L. d. asiatica is not found south of the Himalayan range in India.

Lymantria dispar dispar occurs throughout Europe, parts of the Middle East, the Mediterranean islands of Corsica and Sardinia, North Africa, and North America.

Successful eradication campaigns in some areas of North America and New Zealand have occurred at great financial cost.